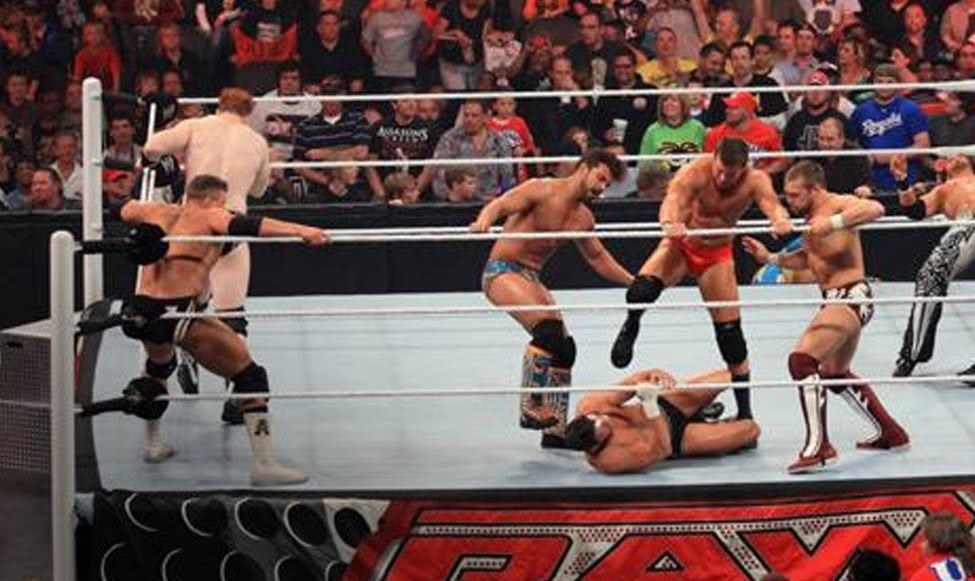 Inferno opens up to a large crowd inside the Performance Center. We see all the superstars inside the ring for our one and only match tonight. A battle royal with tons of stipulations on the mind. Just as it looks like the bell is about to sound we hear the music of Brett Myles. It seems we have one more entrant for this match as he walks onto the stage with a microphone in his hand.

Brett Myles: Ladies and Gentleman, Boys and Girls, Children of all ages. Allow me to introduce myself to you. I am Brett Myles. The Past – Present- and Future of the XWF. And tonight, after I eliminate these losers and win this match. I will be the #1 Contender for the XWF World Title. Because that, is how I roll!

Brett drops the microphone and heads into the ring. As he does the bell sounds and Daniel Slaine wastes no time grabbing Brett Myles and tossing him over the top rope and onto the floor.

JBL: That kid is an idiot!

Jerry Lawler: You know what they say, a sharp tongue is no indication of a keen mind.

Enough about Brett Myles though. This match has started and everyone has found themselves someone to battle. The Union wasted no time going after Daniel Slaine. Meanwhile The Underground have gone after the tag team champions. There’s a number advantage on both sides and teamwork could play a huge role in whose going to win. We see Michael and Nikki trying to toss Slaine over the top rope but arn’t having much luck. Daniel punches away at Michael and gives a stiff kick to Nikki that sends her in the middle of the ring. Meanwhile the tag champs are holding their own and Malaboo shoves Sabrina Rossi into the middle of the ring. Nikki and Sabrina bounce into each other at the same time. Nikki yells at Sabrina and tells her “The Queen is back!” Sabrina apologizes and says she didn’t mean to hit her. Nikki turns her attention back at Daniel but Sabrina with an attack from behind and knocks Nikki to the floor. Sabrina grabs Nikki by the hair and slams her head over and over on the mat. Michael tries to help her but Daniel Slaine grabs Michael and tosses him into a corner. Daniel Slaine climbs onto the ropes and begins punching away at Michael. Meanwhile The Underground is in trouble as Loralie Blackwell nails Mike Dimter with a chokeslam and Malaboo is choking Mike Blade in the corner with her booth. Sabrina picks up Nikki now and brings her over to the ropes.

Sabrina tosses Nikki over the top rope but Nikki Everett holds onto the ropes. Sabrina charges after her but Nikki delivers a knee to the face. Nikki tries to suplex Sabrina over the top rope but it only results in both women on the apron. Nikki with a couple of stiff uppercuts and Sabrina almost falls off the ring. Sabrina fires back with a couple of punches of her own. She tries for a superkick but Nikki grabs her leg and sweeps the others as Sabrina falls to the floor.

JBL: That will teach you for messing with the Queen!

Pandamonium notices Nikki on the apron and they go after her. But Nikki runs away and stands on the steel steps where they can’t get to her. With the tag champs distracted The Underground returns and attacks them from behind. This allows Nikki to enter back into the ring. We see Michael Everett being tossed over the top rope but he lands on the apron and slides back underneath the bottom rope. With Slaine distracted Nikki comes up behind him and nails him with a low blow. With Daniel down this allows The Union to put their focus elsewhere. Despite eliminating Sabrina it seems The Union an Underground are going to work together as they work on Loralie Blackwell and Malaboo Dreamstone. The numbers game might be too much though as the champs try to fight as best as they can. Mike Dimter and Michael Everett work together and eventually are able to toss Malaboo over the top rope and on the floor.

Jerry Lawler: A tough break for Malaboo who really had no chance against those numbers.

JBL: Thats ok because Loralie is about to join her!

JBL: Why would Daniel keep Loralie in this match? It’s supposed to be everyone for themselves.

Michael Cole: Maybe the enemy of my enemy is my friend? Maybe Daniel would rather make sure The Union doesn’t win even if that means Loralie does.

Mike Dimter goes over to Loralie now and tries to finish the job that Mike Blade started. Dimter charges at her but Loralie moves out of the way and Dimter lands on the apron. Nikki Everett comes in though and kicks him off the apron and Nikki eliminates Dimter. Loralie quickly returns inside the ring before Nikki can do the same to her. We are down to the final four. The four superstars look at each other and suddenly Loralie and Nikki Everett go after one another and that leaves Daniel Slaine and Michael Everett to do battle as well.

Jerry Lawler: The Union has the numbers advantage now. They are the only complete team left in this match.

Back and forth action as it appears The Queen is taking it to Loralie and showing why she was a former Womens Champion. Nikki nails Loralie with a spinebuster and then turns her attention to the other side of the ring. Nikki goes over and helps Michael as they double team on Daniel Slaine. They lift him up and try tossing him over the top rope. Daniel fights his hardest to hold on and Loralie gets back to her feet. She’s see’s whats going on but just stands there and watches.

Michael Cole: How about this. Daniel Slaine helped Loralie earlier but it appears Loralie isn’t going to return the favor.

JBL: Finally someone with some sense! It’s everyone for themselves!

Daniel Slaine is able to handle things on his own though and gets back inside the ring. Daniel leans against the ropes and Michael Everett looking to finish things off. He springs to the opposite side of the ring wanting to get a full charge. But as he does Loralie lowers the ropes and Michael Everett goes flying over the top rope and onto the floor. Michael looks shocked as he can’t believe what just happened.

Nikki Everett can’t believe it either but she’s furious now as she charges at Loralie. Loralie and Nikki nailing each other with left and right punches. Neither backing down as they continue to fight. Daniel Slaine comes over now and gets involved as all three begin trading punches. Eventually Loralie grabs Daniel and Nikki and slams their heads together. It seems like this could be her night. She goes to grab Nikki and perhaps eliminate her when suddenly Angel appears out of nowhere. Loralie doesn’t see her yet until she backs up into her. Loralie turns around and is grabbed by the throat. Angel lifts her into the air and slams her with a chokeslam.

Michael Cole: I think this is a little revenge for what happened at New Horizon. We know Angel likes Loralie but I think Angel feels like Loralie took Malaboo’s side in that match.

Angel leaves the ring and that allows Nikki Everett to pick her up and toss her over the top rope. It’s now just Nikki and Daniel and Nikki realizes that situation too. Daniel Slaine approaches her and it looks like he’s got months of revenge on his mind. He grabs her by the hair when suddenly he’s attacked from behind by Michael Everett.

Jerry Lawler: I thought he was eliminated?!

Nikki laughs as Michael Everett beats down on Daniel and eventually locks him into the TCO Submission hold. Nikki slaps Slaine in the head while Michael applies pressure on the legs of Daniel. Nikki skips around the ring while Michael continues his submission hold but Daniel refuses to give up. Slaine flips around and uses both feet to push off Michael. Michael Everett charges at Daniel but Slaine moves out of the way. Michael runs into Nikki who gets pushed out of the ropes but she somehow holds on. Michael turns around and Daniel Slaine nails a KTFO onto Michael. Nikki on the apron now and she springboards onto the ropes and flies at Daniel. He catches her though and nails a KTFO on her as well. Daniel then tosses Nikki over the top rope and this match is over…

Michael Cole: There you have it folks. And with Daniel Slaine’s win he’s got a big decision to make.

Jerry Lawler: That’s right, he can challenge for another title or he can decide the match stipulation of his US title defense.

JBL: This is terrible, who thought those stipulations were a good idea!

Michael Cole: We’ve heard Daniel Slaine talk about what he might do but now that he’s won will his decision stand? We will have to wait until next Inferno to find out. Goodnight everyone!