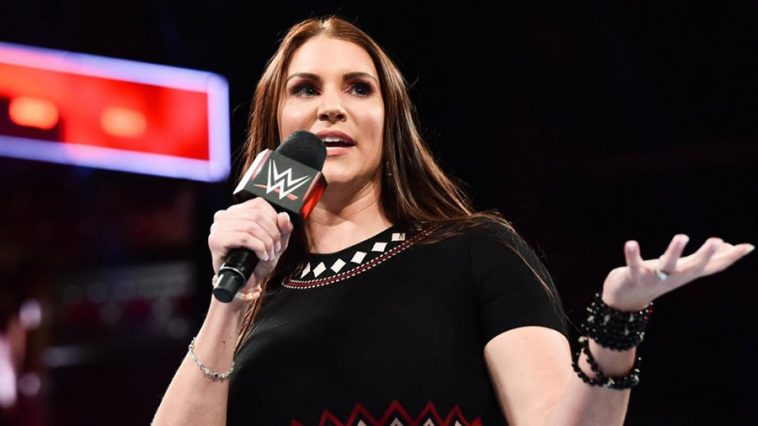 Our show opens up to a sold out crowd tonight as we anticipated the crowning of a new United States Champion. As we prepare for the battle royal match we suddenly hear the music of Stephanie Forcer. Stephanie has a microphone in her hands as she stands on the entrance ramp area. The fans cheer loudly as she begins to speak.

The fans cheer loudly for her.

Jerry Lawler: What do you think she’s talking about?

Stephanie Forcer: You see, tonight a new United States champion will be crowned. However it won’ be in a battle royal match. These past two weeks were a test. A test to see who wanted the gold. To see who was willing to work hard for the oppertunity. Who was willing to show that Ruthless Aggression that my father made famous. And I saw two competitors do just that. So tonight they are being rewarded and their odds have increased. Tonight we will see Mike Dimter go up against Loralie Blackwell. A 50/50 chance at greatness and one of them will be your new champion tonight!

JBL: What? Are you kidding me?!

Michael Cole: Hard work pays off and what a match that’s going to be.

Stephanie Forcer: Good luck to both competitors and lets get this match started. Right Now!!

Michael Buffer: The following contest is scheduled for one fall and is for the United States Championship! On her way to the ring first, she hails from the 7th layer of hell. Weighing in at one hundred and ninty pounds…. Loralie Blackwell!

A little girls giggle is heard and then ” out of the darkness hells queen did call to pain and suffering she brought to them all away ran the children to hide in their beds in fear that the devil would chop off there heads. (the little girl giggles again) At that point the lights go out and fog fills the stage as Sick like me by in this moment hits a fire ball shoots out of the stage and turns into Loralie Blackwell. She makes a fireball appear in her hand. She holds it up one handed for all to see sticking out her tongue and holding up devil horns with the other. She heads down the ramp to the ring in cat-like strides glaring at the crowd as the non believers boo her and her followers cheer. She stops at the edge of the stage and snaps her fingers disappearing only to reappear in the middle of the ring and heads to her corner.

Michael Buffer: And her opponent, weighing in at two hundred and thirty-five pounds. He is a member of The Underground…. Mike Dimter!

Michael Cole: Well as you can see folks we have a huge twist in the action tonight. What we thought was going to be a battle royal is now a singles match between two competitors that have a huge history with each other.

Underground theme music blasts across the arena as Mike Dimter walks onto the stage. He makes a motion of the tag title being around his waist as he stares at Loralie. Mike Dimter walks down the ramp and into the ring.

Jerry Lawler: Just a few months ago they were competing for the tag team titles. Tonight its singles action for the United States Championship.

Mike Dimter and Loralie Blackwell circle each other in the ring as they size up one another. Loralie looks a little hesitant to advance toward Dimter. Dimter charges towards Loralie who slides out under the bottom rope. Loralie walks around the outside of the ring without taking her eyes off of Dimter.

Michael Cole: Loralie never backs down from a fight but there’s no denying the size advantage between these two competitors.

Mike Dimter backs off allowing Loralie to get back into the ring under the bottom rope. As soon as Loralie gets back to her feet her right arm is grabbed and she is hit with a short-arm clothesline from Mike Dimter. Loralie falls to the ring mat and her head bounces off the mat. Dimter then grabs Loralie’s arm and pulls her back to her feet. He irish whips Loralie into the ropes and Loralie bounces off of the ropes and tries for a cross body but is caught by Dimter. Mike Dimter body slams Loralie to the ring mat. Going for a cover….

No kick out by Loralie as she barely gets her left shoulder up. Mike Dimter stands to his feet and is followed by a groggy Loralie. Dimter hits Loralie with a right hook. Loralie falls back to the mat but this time rolls onto her abdomen to avoid being pinned. Loralie crawls to the ropes and pulls herself up. Dimter charges towards her but Loralie ducks and pulls the top rope down causing Dimter to go over the top rope.

Jerry Lawler: That was a smart move by Loralie. That should buy her a couple of minutes.

JBL: That was pure luck if you ask me. And I’m still not sure I like the idea of Stephanie changing this match. And Loralie of all people? She gives me the creeps.

Loralie Blackwell realizes this is her opportunity and climbs to the top turnbuckle. She waits for Dimter to get to his feet and jumps and delivers a missile drop kick to Dimter. Dimter stumbles backwards into the barricades. Loralie gets back to her feet and tosses Mike back into the ring. Loralie goes for a pin right away.

Kickout with force by Mike Dimter. Loralie gets up and waits for Mike Dimter to return to his feet. As soon as he does Loralie nails him with a twist of fate that lays him back out in the center of the ring. Loralie climbing the top rope now and she’s looking to put this one away. She leaps off with the Nightmare Twist! Cover now…

The referee hands Loralie the United States title as she wraps it around her body. The referee raises her hand as the fans cheer.

JBL: This night is off to a horrible start.

Jerry Lawler: These fans would beg to different and so would I.

Michael Cole: A great main event but folks the show is not over yet. We take a short commercial break and when we return. Kevin Kronic announces who his opponent will be at Anarchy. The biggest show of the year!

We return from commercial break when suddenly “Without Me” by Eminem blasts across the arena. We see Kevin Kronic walk onto the stage. The fans cheer loudly as our new World Champion makes his first apperance since winning the title. Kevin Kronic is dressed in a suit and tie. Looking professional as Co-Owner of the company. Kevin makes his way down the entrance ramp and climbs into the ring.

Michael Cole: Welcome back everyone and as you can see the champ is in the building. And in just a few minutes we find out who he faces at Anarchy.

Jerry Lawler: I still can’t believe that Kevin Kronic is our World Champion. It didn’t feel real until seeing him out here with the title. It has been over 10 years since he’s been a World Champion.

Kevin Kronic: Let me just say that its great to be here tonight in Long Island, New York!

Kevin Kronic: And it is even better to be in front of such a great group of fans. To have you all back in this stadium is beyond amazing. It’s true. But I’m not out here to talk about the fans. I’m here to talk about the World Championship that rests on my shoulder. Now before I get onto business I want to say one thing. At LockDown Ashley pushed me to my limits. She gave me everything she had. And it can be argued that she should be standing here right now as the champion. Now I don’t have all the details – and I don’t know what happened that night. The only thing I know is that at the end of the night, I won. And I can’t control what happened to Ashley and I can’t blame myself for what happened to Ashley. It wouldn’t be fair to me and it wouldn’t be fair to this title. The bottom line is I won this championship and when Ashley wants a rematch for it. I’ll be here and I’ll be ready.

JBL: How cocky can you be. Kevin Kronic thinks he’s going to be champion forever?

Kevin Kronic: But lets talk about Anarchy. The biggest show of the year. And in the Main Event this World Championship will be put on the line. The question though – is against who? After much discussion with Stephanie it became clear that there was only one challenger that made sense. It’s a man who never got a rematch for the World title when he lost it. And someone who has main evented many Anarchy PPV’s in the past. The next challenger for the XWF World Title will be…. Michael Everett!

Suddenly “Judas” by Fozzy blasts across the arena.

Michael Everett walks onto the stage. Also dressed in an expensive suit. He walks down the ramp and climbs into the ring. Michael Everett grabs another microphone from the bell keeper and begins to speak.

Michael Everett: Hello….Dad. I don’t often agree with you. But I will agree with you on two points you made. The first point is that I also have no idea what happened to Ashley and I’m saddened to hear that she is retired from the XWF.

Michael Cole: O come on, Ashley isn’t retired. We don’t know that for sure.

JBL: Have you heard from her since Lockdown? Me either!

Michael Everett: And I also agree with you that there is no other man that deserves a shot at the World Championship…than me. I am the best in the business. I am the greatest thing to come out of XWF. And I have held that title more than any other superstar. And at Anarchy I’m going to win it again. You better believe that.

Kevin Kronic: Then there’s only one thing left to do Michael. You just need to put your name on that contract. But once you do – I want you to realize one thing. You might TRY to win the World Championship. But TRY is the best you are going to do. Because at Anarchy I plan on kicking your….

Before Kevin Kronic can finish his thought we hear “Coming Alive” by Dale Oliver as Max Farrell walks out onto the stage. Both Kevin Kronic and Michael Everett look confused as he heads down the entrance ramp. Max Farrell climbs into the ring and stands between both men.

Kevin Kronic: Can I help you Max?

Kevin Kronic: Ok….then do you mind telling me why you’re out here?

Max Farrell doesn’t say anything. Instead he shrugs his shoulders. He looks at Michael and then at Kevin. Suddenly Max Farrell kicks Kevin Kronic in the midsection and nails him with Criminal Justice! in the middle of the ring.

Jerry Lawler: What is he doing!? He’s going to get himself fired!

Suddenly Max Farrell kicks Michael Everett in the midsection and nails him with Criminal Justice as well. Max Farrell then looks at the contract sitting on the table. Max flips through the pages and then gets to the last page. He grabs the pen and signs his name on the dotted line.

Michael Cole: Max Farrell has just signed his name into the Main Event of Anarchy! Is this offical? We need some clarification but right now Max Farrell has made a statement here tonight!

Max Farrell climbs out of the ring and the fans cheer loudly. Michael and Kevin start coming too as Max keeps his eyes on them with a smile on his face as Inferno comes to a close.