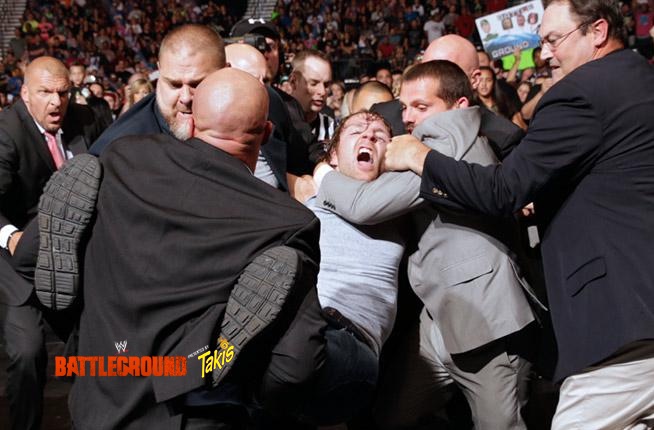 We are kicking Inferno off right away as both Sheena Montgomery and Paris Ouellet are already inside the ring. Montgomery set up for a suicide dive early in the match but Paris moved and Sheena stopped at the ropes. Sheena went to the apron and caught Paris with a kick and worked her inside the ring.  Back and forth action as eventually the two would end up back outside as Paris Ouellet stood on the floor and then suplexed Sheena from the apron to the floor. Back in the ring, Paris covered her for a two count. A short time later, Paris caught Sheena in a backslide and then put her feet on the ropes for leverage but again only a two count .Eventually Sheena Montgomery would turn the tide and hit her with the Last Call for the three count.

After the match we are welcomed to the show by Michael Cole, JBL, and Jerry “The King” Lawler. They announced tonight was the final show before our next PPV but we had a huge lineup. Cole runs through the card including our Main Event later tonight which features Jason Thunder and Daniel Slaine. Up next though we have the #1 Contender for the United States title – Michael Everett in action.

The match spilled over to ringside. Michael Everett stuffed a powerbomb attempt and then chokeslammed Josh Blade onto the ring apron heading into a break.

Josh Blade was in offensive control coming out of the break and performed a Swanton Bomb for a near fall. Everett stuffed a Cutter attempt, but Blade superkicked him. Blade ran into a big boot and Michael performed a DDT for a near fall. Everett performed a Deep Six and acted shocked that he didn’t get the pin even though it’s still early in the match. Michael Everett worked the knee a bit and then ran the rope and ate a kick from Blade who followed up with a Blade Cutter but it was only enough for two. Everett continued to work the leg when he got some offense in and it paid off as he eventually locked in the TCO as Josh has no choice but to tap out.

We’re backstage with Max Farrell as Renee Young asks him what he’s doing backstage despite not having a match. Max said he had a plan tonight and took offense to not being on the card. Max said he’s the number one contender for the World title and he wanted to remind everyone that was the case. Max said he’s not someone who begs for attention but tonight he would get Slaine’s attention…

As both men enter the ring Jake Ryan shoves the tag titles into the face of Sid Vicious and tells him he’s a champion and that Sid’s a nothing. The bell sounds and Sid gives off an evil laugh. He grabs Jake and tosses him across the ring. Sid picks him back up and then nails him with a couple of boots to the face. Sid Vicious then nails him with a chokeslam and is in total control of the match. He never goes for a pin though, grabbing Jake Ryan and nailing him with a powerbomb. Sid asks the crowd if he wants one more. Sid grabs Jake Ryan again but as the referee gets distracted by Mike Dimter, Ryan nails a low-blow to Sid. Jake Ryan reaches into his trunks and grabs a pair of brass knucks, he nails Sid in the face and then covers him for the three count.

Jake Ryan and Mike Dimter quickly run away after getting the win as Sid Vicious looks furious as he recovers and makes the motion that he’s going to break Jake Ryan in half the next time he see’s him.

The two traded arm-locks before the they got to their feet and the crowd cheered. Nikki Everett landed a dropkick and a high-knee in the corner. Nikki went to the top and landed a cross-body block from the top rope for a near-fall. Nikki ran at April DImter, but April got the boot up and then dropkicked Nikki to the outside of the ring. April then hit a cannonball Senton. April then slammed Nikki to take control. April went for a springboard, but Nikki got the knees up to even the odds. Nikki Everett landed a snap dragon suplex. Nikki ran at April, but April moved and the two traded pin attempts before Nikki got a hell of near-fall. The two fought on the top and it looked like a Spanish Fly was supposed to happen, but the two just kind of fell to the canvass and April Dimter got a great near-fall. The two traded elbows. April went for a strike, but Nikki Everett rolled her up and grabbed the tights for another shocking pinfall.

99 Bottles by Slaine plays as Daniel Slaine walks onto the stage. He looks at the Dumpster and then at Max Farrell. Security quickly rushes out to keep Daniel from entering the ring. Daniel Slaine then backs up and starts to go back up the ramp. He then quickly turns around and slides into the ring. Max and Daniel Slaine begin going at it, throwing as many punches at each other as they can. Security rushes into the ring and separates the two again. Daniel Slaine breaks free and charges at Max as the two fight again but security eventually breaks them up.

Michael Cole said this was just a sample of what you could expect at the PPV. As he’s saying that Max Farrell breaks free and dives at Daniel Slaine as security tries to restore order and Inferno comes to a close…