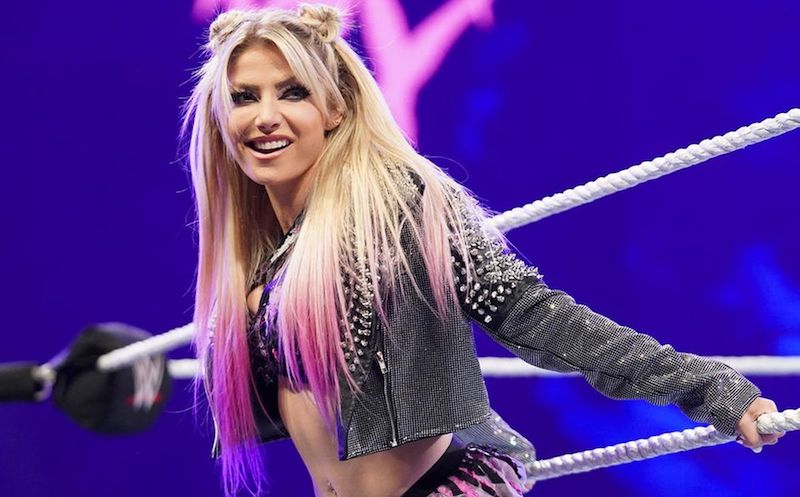 Inferno opens up with Paris Outlet, Brandon Draven, and Sid Vicious already inside the ring. Suddenly the all too familiar theme music of Sheena Montgomery blasts across the arena. The fans rise to their feet with a huge pop as Sheena makes her return to the XWF Performance Center. She gives off a smile and walks down the ramp.

Michael Cole mentions that many never thought Sheena would return but she is here tonight.

JBL claims that he thought she was retired or dead. Jerry Lawler quickly responds and says that if The Union had their way she might of been. But Sheena is putting the past behind her and looking for a fresh start.

Once Sheena gets in the ring the bell sounds and our first match is quickly underway.

Sheena Montgomery quickly tossed Brandon Draven to the outside and then took Draven out with a dive. Paris Ouellet did a baseball slide dive from the ring onto Sid Vicious. who was down on the floor. Paris and Sheena squared off together inside the ring. They took turns avoiding and countering moves. Sheena eventually suplexed Paris and covered her for a two count. Sheena went for a top rope move and landed on her feet when Ouellet moved. Brandon returned to the ring and worked over Paris and Sheena. Sid Vicious ran in and was hit with a spinning heel kick from Draven.

Back to the action as Sheena caught Psycho Sid seated on the top rope. Paris joined Sheena on the ropes. Draven slipped under Paris and Sheena Montgomery and slammed them to the mat. Brandon covered Paris, but Vicious leapt from the ropes and dropped a knee on Draven to break up the pin. Sid hit a big boot on Draven. Sid hoisted him up and then Draven elbowed his way free. Psycho Sid responded with a knee to the head and a backbreaker. Sid put Draven in a Cloverleaf.  Paris went for a superkick on Sid to knock him out. She then followed up with one that Sheena Montgomery blocked. Sheena set up for a move, but Paris countered into a move that spiked Sheena on top of her head and covered for a three count.

After the match we went down to commentary as Michael Cole welcomed us to the show. He said we had a huge night as XWF was back and better than ever. He said tonight the tag team titles would be on the line with Everett and Angel in action. Jerry Lawler questioned the rumors if Angel and Michael were on the same page.

JBL quickly assured us there were no issues with The Union team. Michael Cole also said that Nikki Everett would be in action tonight along with Daniel Slaine whose match was up next.

We go down for ring introductions as Daniel Slaine makes his way to the ring first. He’s followed by Brett Myles and finally Max Farrell.

The bell sounds and Max Farrell is ready to start the match against Daniel Slaine. The two go to tie up and Brett Myles tags himself in at the last second. Max Farrell gets in Brett’s face and tells him to watch himself. Brett Myles begins mocking Max Farrell and then slaps him in the face. Brett says he’s the future of XWF, not him. Max Farrell gives off a grin and then kicks Brett in the midsection and follows up with Criminal Justice before leaving the ring.

JBL yells that Max just turned on his own partner. Michael Cole says that he doesn’t blame Max and Brett Myles doesn’t respect anyone.

Brett Myles tries to climb back to his feet but Daniel Slaine is waiting. Daniel picks up Brett and nails him with the KTFO! He goes for a cover but Daniel stops himself at two. He asks the crowd if they want one more and they do. Daniel Slaine picks up Brett once again and delivers a second KTFO before covering him for the three count

Max Farrell watches at the top of the ramp and begins clapping Daniel Slaine. The two stare at each other again as we know the two of them will face of at XWF’s next PPV.

Going backstage now we see Nikki Everett preparing for her match. She is interviewed by Renee Young who asks Nikki if she’s ready for her match tonight. Nikki says she’s going to remind the world why she’s the Queen of the XWF and that she is the greatest womens wrestler in the history of this company….

Hayley Morgan hit a few headbutts and even got a low dropkick that sent Nikki Everett to the corner. Nikki gained advantage with a release German suplex. Nikki continued with a short clothesline from the left arm and eventually locked in Michael’s TCO for the submission tapout.

A quick match by the Women’s Champ but it doesn’t appear she’s done yet. Michael Everett gets into the ring and tells Nikki to finish the job. Nikki locks in the TCO again and Hayley continues to tap out. Nikki’s trying to break her legs as Michael watches on.

Suddenly the crowd pops though as Ashley Slaine rushes out from the entrance area and slides into the ring. Ashley stares at Michael as Michael backs up and asks her what she’s doing here? Ashley gives off a smirk and acts like she’s going to attack Michael but instead she turns her attention to Nikki who has released the hold and Ashley spears Nikki to the ground. Ashley hovers over top of Nikki and begins pounding away at her. Michael tries to get Ashley off her but Ashley kicks him away. Nikki and Ashley wrestle on the floor as security rushes in to help Michael separate the two of them.  Nikki calls Ashley a bitch and tells her she’s the queen. Ashley yells at Nikki that she’s going to be her worst nightmare.

JBL says that Ashley should be arrested for what she did to Nikki. Michael Cole says that its great to see Ashley back in an XWF ring and that she’s set her sights on her cousin. Jerry Lawler wondered how Michael was going to prepare for his tag title match knowing that Ashley was back.

We return from commercial break and out walks the Queen of Darkness Angel as she joins Michael Everett in the ring. Up next is MIke Dimter and Jake Ryan. They call themselves The Kingdom and their shot at the tag titles starts now…

The Kingdom Vs The Union

Mike Dimter sent both members of The Union to the floor. Everett returned to the apron and Dimter hit him with a running knee. Jake Ryan went up top and dove onto both heading into a commercial break.

The Union took offensive control and then Everett hit Ryan with a suicide dive. Everett isolated Ryan but Ryan eventually kicked Michael away and dove for the tag, but Angel pulled Dimter off the apron. Everett performed a neckbreaker on Jake Ryan and covered him for a near fall. Dimter took a hot tag shortly after the break. Mike Dimter worked over Angel. Everett ran in and Mike Dimter got the better of him and ran him into his brother. Dimter took out Everett with a side Russian leg sweep. Dimter put Angel down with a gutbuster and covered him for a two count. Ryan tagged in. Dimter perfomred a double stomp on Angel and then Ryan covered him for a good near fall. Ryan performed a Boom Drop on Angel. Ryan hit the SOS on Angel for another near fall. Ryan showed frustration over not getting the pin. A short time later, the Union hit double superkicks on Dimter and Ryan, then hit Dimter with another. The Union went to opposite corners and hit a double splash on Dimter. Michael Everett covered Dimter for a great near fall. The Union set up for 3D, but Jake Ryan pulled Everett out of the ring and ran him into the ring steps. Dimter clotheslined Angel over the top rope. Ryan held Everett over his knee and then Dimter leapt from the second rope and hit Everett with a move. Dimter returned to the ring and DDT’d Angel. Ryan tagged in and hit the Midnight Hour on Angel, but Everett returned and grab the referee by the legs and tossed him out of the ring. Michael Everett then reached under the ring and grabbed a steel chair.

Michael brought the chair into the ring and begun swinging widly, missing Ryan but keeping Dimter out of the ring. Michael Everett then turned around and clocked Angel over the head with it. Ryan and Dimter both look stunned. Angel sat up, looking hardly phased by the chair but Michael reached back and nailed her over the head again as hard as he could. He then told Ryan to pin her as Everett got out of the ring and tossed the referee back inside. The dazed referee counted to three and we have new champions.

Michael Cole talked about how stunned he is and even JBL can’t believe it. The Kingdom get out of the ring in a hurry but Michael says he’s not done yet. He grabs Angel and carries her out of the ring. He drags her up to the top of the ramp and tells her he knew about Sheena and she was right. Michael says he didn’t need her. He never did and that she was another pawn. Michael slapped her in the face but that woke the sleeping giant.

Angel grabbed Michael by the throat and started choking him out but the chair shots did damage to Angel as Michael is able to break free after a couple punches to the skull. Michael then carried Angel over to the site of the entrance area. He lifted her up into a powerbomb and tossed her off the stage and onto the pyro area. There’s a huge explosion as fireworks go off and a fire erupts where Angel landed. Security and EMT’s quickly rush onto the scene and jump down to Angel to try and check on her.

Michael looks at the camera man closes to him and stares into the camera. Michael said he was starting the new XWF off with a “bang” and there wasn’t anyone who was going to stop him as Inferno comes to a close.