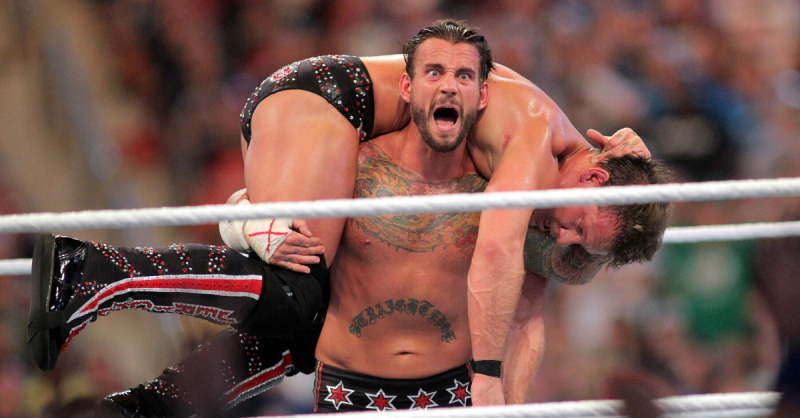 The show opens up live at the XWF Performance Center for a historic night in professional wrestling. Many wonder if tonight could be the final night for XWF. The camera pans around to the crowd. A sold out show tonight with the fans on their feet and louder than perhaps ever before. As the camera swings around the performance center it eventually finds its way to the commentary desk. We are joined by Michael Cole, JBL, and Jerry “The King” Lawler.

Michael Cole welcomes us to the show and thanks all the fans who are in attendance tonight and are watching from home. Michael Cole says that later tonight we will learn the fate of XWF. But if tonight is the final night, it’s going to be a great night of wrestling.

JBL says some superstars tonight could be looking to go out on top. Other superstars will use tonight as an audition tape for other companies.

Jerry Lawler says that he’s been here since the very beginning and couldn’t picture calling matches for any other company. He hopes tonights news is good news. But he also says that tonight will prove why there are no better wrestlers than in XWF.

Michael Cole breaks down the card including our Main Event as Daniel Slaine puts his title on the line against Michael Everett and the former champion Jason Thunder. We also have a family rivalry match as Nikki Everett takes on Ashley Slaine for the Knockouts title. But right now we head down to ringside for the first match of the night.

As we go down to ringside we see CJ Walker already inside the ring. Up next is Max Farrell. Max walks onto the stage and for some reason he is wheeling a dumpster to the ring with him. Max positions the dumpster at the bottom of the entrance ramp and CJ Walker looks just as confused as everyone else. Max Farrell enters the ring and goes to his corner as this match is set to begin.

Max Farrell drove CJ Walker’s face onto the mat. Walker rolled to the floor and complained about an eye injury. Max chased him back into the ring and dropkicked him. Max sent Cimapa to the floor and then went over the top rope and hit him with a forearm on the way down. Max Farrell suplexed Walker into a corner of the ring. Max went for his finisher moments later, but CJ Walker caught him with a knee to the head for a good near fall. Moments later, Walker placed Max on the ropes and then hoisted him onto his back, but Max slipped out. Max Farrell performed the Criminal Justice! and got the three count to end the match.

After the match Max Farrell grabbed the microphone and said he loved the fans. He said he wouldn’t be who he is today without them and he will forever be thankful for XWF. Max said that he was always the first to get to the arena because this place was his home and he said tonight he would probably be the last person to leave. Max said he’d still be here even when the janitors left. Max Farrell said he was a fighter and that XWF is a fighter to and a company that refuses to die. Max said that sometimes you need a shakeup and sometimes you need to take out the trash.

Max said that he was going to help with that part right now. Max Farrell drop the microphone and watched as CJ Walker attempted to get back to his feet. As soon as he did, Max grabbed him again and nailed another Criminal Justice! Max then picked up Walker and tossed him out of the ring. Max opened up the dumpster lid and tossed Walker inside of it and closed the door shut. The fans cheered loudly as Max then grabbed the dumpster with Walker inside and rolled it up the ramp and into the back.

This match was originally supposed to be a triple threat but Michael Cole announced prior to the match that Angelica Roberts has been released from her contract.

The bell sounded and Angel took Sabrina Rossi down to start. Angel caught Sabrina with a high knee to the head, then followed up with a quick slam and covered her for a two count. Sabrina threw some flailing punches at Angel and hit her with a step-up enzuigiri. Angel knocked her right back down. Angel hoisted up Sabrina Rossi for a tombstone but Sabrina elbowed her way out of it. Sabrina hit a Codebreaker and then went for a DDT but Angel stuffed it. Angel put Sabrina in an armbar but she rolled out of it and countered into a submission hold, but Angel powered up to her feet with Sabrina on her back. Sabrina Rossi performed a crucifix driver for a two count.

Angel caught Sabrina in an armbar while hanging over the edge of the ring and had to break the hold due to the referee’s count. Angel took Sabrina Rossi down again, spoke to the crowd, and then nailed her with a chokeslam. Angel then followed up with the Apocalypse! and covered her for the three count.

Angel had an evil look on her face but a grin as she admired the damage done to her opponent. The camera then faded to the backstage area where we saw Nikki and Michael Everett. Renee Young was with them and asked Nikki if she had any final comments before her match.

Michael was going to continue speaking when Kevin Kronic walked up next to them. Kevin said that Michael would actually not be at ringside for the match. But told Michael it’s ok because neither would Daniel Slaine. Kevin Kronic said he wanted two of his three main eventers to be focused on their match and not on what their ladies were doing. Kevin said if Michael or Daniel interfered in the match tonight they would be removed from the World title match.

Ashley Slaine went for an early leapfrog, but Nikki Everett tripped her. Nikki targeted the legs of Ashley while the broadcast team explained that it plays into her finisher. Nikki drew solid heat early on.

Ashley did a handspring into the ropes and then dropkicked Nikki. She followed up with a standing moonsault moments later and got a two count. Nikki rolled to the floor. Ashley followed her and tried for a Blade Cutter on the outside, but Nikki countered and pulled Ashley into the barricade. Nikki followed up by dropping a leg over Ashley, who was draped over the barricade. Nikki brought Ashley back inside the ring and covered her for a two count. A short time later, Nikki rolled Ashley into another pin for a two count. Ashley sat up next to the ropes and ate a dropkick. Nikki went up top and went for a leg drop, but Ashley countered into a powerbomb while reaching through the ropes.

Nikki Everett came back and booted Ashley to the floor. Nikki dove at Ashley, who caught her, and dropped her on the apron. Nikki ended up rolling Ashley through the ring and held onto her braid, but Ashley ended up suplexing her on the floor. Back in the ring, Ashley Slaine performed a handspring into the ropes and then delivered a standing moonsault for a two count. Nikki went for a crossbody block from the middle rope, but Ashley rolled through and tried to power her up. Nikki escaped and then flipped over Ashley after leaping from the middle rope and performed a Stunner for a near fall.

A short time later, Ashley came back and went for a Blade Cutter, but Nikki held onto the ropes. Nikki rolled Ashley into position for a Blade Cutter of her own but Ashley countered and brought Nikki with her. Ashley put Nikki down with a Blade Cutter! on the ringside floor. Ashley tried to drag Nikki back to the ring, but she was dead weight. Ashley gave up and returned to the ring, then Nikki barely beat the referee’s count. Ashley hoisted up Nikki and went for another Blade Cutter in the ring, but Nikki escaped and poked Ashley in the eyes blinding her. Nikki then dove at the legs of Ashley before locking in the TCO submission on Ashley. Ashley’s legs targeted all night and thinks about tapping but eventually reaches the ropes.

Nikki drags Ashley out of the ring and the two begin battling up the entrance ramp. The referee could disqualify them both via countout but he’s trying to restore order for a clean finish.The two continue battling but Nikki kicks Ashley in the midsection and tries to climb the titantron. Ashley nails her with punches and forces Nikki to come back down. Ashley nails Nikki with a scoop slam onto a table and then delivers more punches. Ashley looks up at the titantron and then at Nikki. Ashley begins to climb up the stage and gets to the very top. She has to be at least 50 feet in the air. Ashley looks down at Nikki and says a quick prayer. Ashley then leaps off the stage and both crash through the table. The referee calls for the bell and EMT workers quickly rush to the scene.

Nikki Everett and Ashley Slaine ends in a No Contest

The broadcast team is in shock as we watch multiple replays and angles of Ashley leaping off the stage. EMT workers continue to check on both women as the camera eventually gives them privacy as we go to the commentary team.

JBL says he’s in shock over what he just saw. Jerry Lawler says this match wasn’t about winning the title for Ashley but instead proving how much she loves this company and would do anything to prove she’s one of the best. Michael Cole said he has to question the decision though and has to wonder how serious the injuries are to both women.

We then go back down to ringside for the main event of the night.

Daniel Slaine went for an early KTFO on Jason Thunder, but Michael Everett broke it up from the floor and pulled Slaine to ringside. Michael slammed the head of Slaine off the broadcast table. Thunder dove onto Everett and then threw him back inside the ring. Later, Daniel Slaine set up for his finisher, but Michael Everett pulled him to ringside. Slaine roughed up Everett and ran him into the broadcast table. Everett sold his ribs. Thunder leapt from the ropes and performed a tornado DDT on Daniel Slaine on the floor. Jason Thunder rolled Everett back inside the ring and followed, but Michael Everett caught him with with a Kronic Bomb and then locked the TCO in the middle of the ring. Jason Thunder in trouble but is eventually able to grab the ropes and break things up.

Jason Thunder rallied with a superkick and then went up top and hit a 450 splash. Slaine was back in the ring and immediately grabbed Jason Thunder by the legs and put him down with a KTFO onto Everett. Slaine covered Thunder and scored the pin…

After the match Daniel Slaine celebrated with his World Title. The fans cheered loudly as a new era of XWF was ready to begin. Michael Cole questioned who would be next to face Daniel and what new faces would we see enter XWF as the show comes to a close.